Helping you move from pain to wellness. 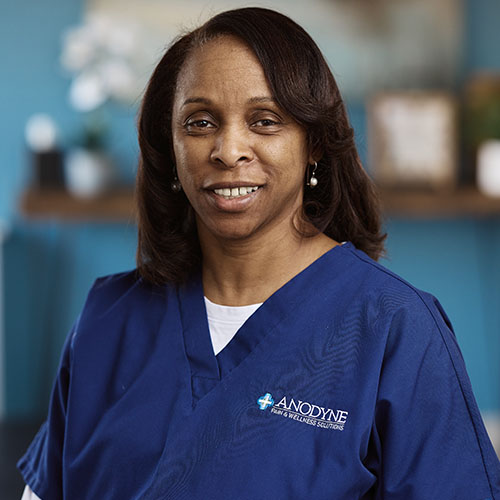 If you're living with acute or chronic pain, get the relief you need. Schedule an appointment at Anodyne today.

Request ApptRequest a Call Back

Meet Kimberly Stanley. Kimberly is the Case Manager and Billing Specialist for Anodyne Pain and Wellness of Westerville. Kimberly is incredibly knowledgeable in many things healthcare, but truly shines when it comes to billing and insurance. In fact, she began her career as a policy insurance agent before transitioning to a customer service and claims representative for a well-known insurance company located in Columbus, Ohio.

Later on, Kimberly began working at Reichert Family Chiropractic where she experienced a whole new world of holistic medical care. She spent some time acting as office manager for a neurosurgery office, where she combined patient care and medical billing experience along with surgical knowledge to help facilitate positive experiences and build relationships that help create overall patient satisfaction and experiences.

Then Kimberly met Dr. Nick Southworth in the year of 2019. Dr. Nick was in search of an experienced office and billing manager for Southworth Active, and Kimberly fit the bill. She stepped in and helped create one of the most sought Chiropractic offices in the central Ohio area.

In 2021, the staff at Southworth Active was offered to join the Anodyne Pain and Wellness group. Anodyne’s goals aligned with Southworth active, so the two joined forces to bringing a new and innovate approaches to  medical care without the use of opioids or surgical procedures.

Kimberly has been married to her wonderful husband for 23 years, she has 3 adult children and a dog named Layla. In her spare time, she enjoys shopping, traveling, and just have a good old time hanging out with family and friends looking forward to the future.

Request a Call Back Today Now!

We will make two attempts to contact you, usually within one business day of your submission.

Get Seen quicker!
Complete Your Patient Forms Before You Arrive.

Save Time by Completing Your Patient Forms Online Before Your Appointment.

Our store is currently under maintenance. Please check back soon. Dismiss